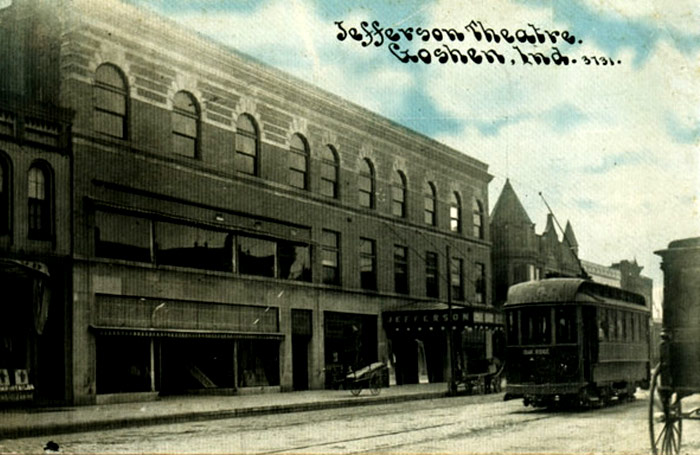 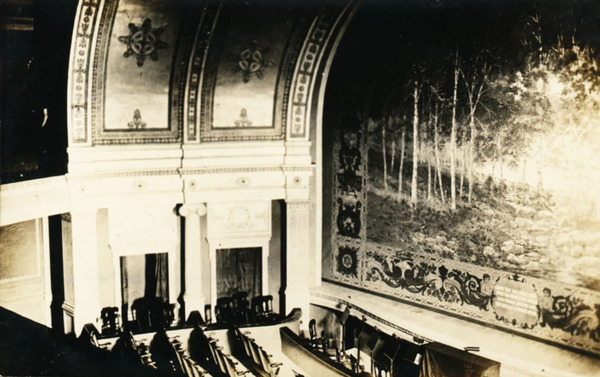 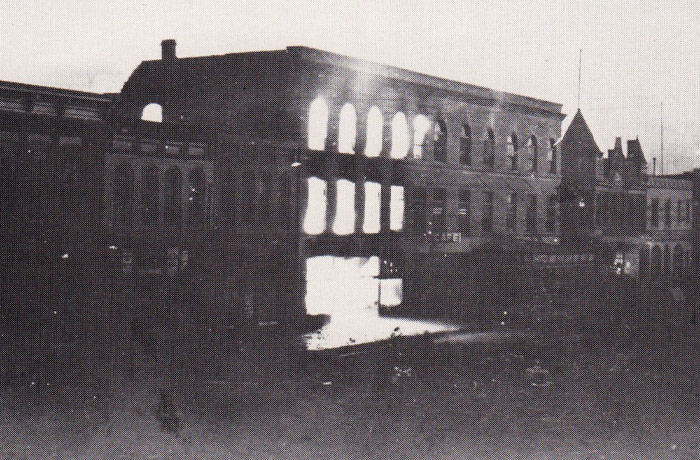 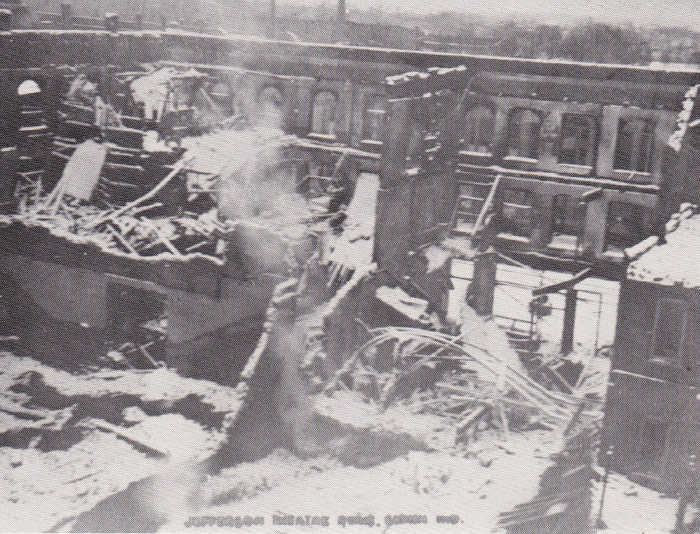 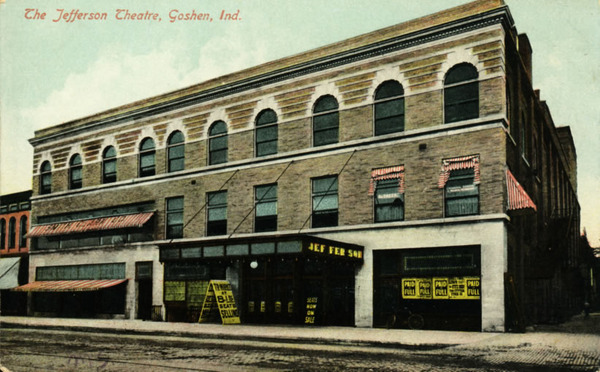 Photo credits: Goshen Historical Society
On November 5, 1905, the official dedication of the Jefferson Theater took place. The event was attended by Governor Frank Hanly and the Indiana Attorney General. Prominent citizens from all over southern Michigan and northern Indiana reserved seats.

At 7:30 p.m. that evening, the doors opened and 11 ushers escorted delighted ticket holders into the lavish theater which featured green and ivory decor with gold leaf trim and red oak and mahogany woodwork. Governor Hanly gave the welcoming address and Richard Mansfield, a famous actor of the time, officially dedicated the Jefferson Theater.

The Goshen News-Times reported that the governor noted in his speech, “Indiana has many splendid cities, many splendid communities and many splendid buildings, but no city the size of Goshen has so splendid a playhouse.”

On December 18, 1906, tragedy struck the magnificent Jefferson Theater. A fire began in the basement of the Stiver and Smith Furniture Store located next door. Despite the best efforts of local fire departments, the flames eventually consumed the building. The next day, residents learned that the Jefferson had been completely destroyed.

Subsequent to the fire, Patton & Miller Architects, from Chicago, were hired to rebuild the theater. On October 10, 1907, the rebuilt Jefferson celebrated its grand return by opening to another packed crowd of dignitaries, featuring a performance by one of the top actresses and comedians of the day, Marie Cahill.

The Jefferson was off and running in what would be a rich era in its history. For the next several years, top-notch theatrical troupes made Goshen a stop between New York and Chicago, treating locals to first-rate performances by some of the top actors and actresses of the time. During the off-season, the Jefferson remained open showing silent movies and hosting political and community events.

The evolution from a stage theater to a movie theater started in the early 1910s with occasional nickel films. In the summer of 1920, the Jefferson, which was at that point primarily used as a movie theater, was undergoing a major remodel. This project included removing the second balcony, or “gallery,” which made room for the new permanent projection room that still remains. The decade closed with Goshen’s first talking picture, “Glorious Betsy,” in January 1929.

In addition to movies and plays, the Jefferson always featured a wide variety of events. Patrons could see famous Americans of the day, such as evangelist Billy Sunday, South Pole discoverer Roald Amundsen, and famed instrumentalist John Philip Sousa and his band.

In 1948, the Jefferson was remodeled with new seats, a new projection system and screen, tiled restrooms, and a new V-shaped marquee. The name Jefferson did not fit on the new marquee, so it was during this installation the theater was re-named the Goshen Theater.

The 1948 remodeling resulted in the theater that movie viewers from the 1950s to the 1980s remember.

Movie fans in the 50s and 60s generally saw continuous shows, often featuring a cartoon, a short subject, previews, and the main feature. Because the shows were continuous, patrons arriving late for the main feature would wait for the film to start again to see what they had missed.

Bill Miller and Miller Theaters, Inc. purchased the theater during this period. Miller also owned theaters in Elkhart, including the Elco and State and later, the Concord Mall Theaters.

By the 1980s, the Goshen Theater was owned by Roger Vore and Kosko Theaters. This was the beginning of the end of the movie theater period. The company declared bankruptcy. Negotiations to reopen the theater under new ownership ran into numerous legal and practical problems. By 1987, the theater was owned by Midwest Commerce Bank which had formerly carried the mortgage. The last regularly scheduled movie was shown June 21 of that year.

In July 1987, it was announced that the building was being purchased by Word of Life Church. Later it was occupied by the church Downtown at 8:08. Even during this period, there were occasional concerts and efforts to show regular family movies. In 2005, there was a big centennial celebration for the theater.

The church period ended with the purchase of the theater by Goshen Theater, Inc., a newly founded nonprofit, in 2014.